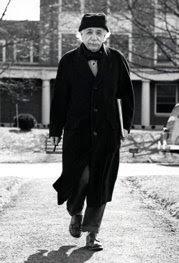 ← Albert Einstein, out for a stroll, and yes, the arms do seem to be fairly unswung, smashing my current theory to smithereens….

Wow.
Seldom will I post an email response to one of my blogs [in fact I don't think I have ever done so] but this one was too good.
My nephew Chris, yeah -- That Guy That Is Touring The World©, beginning in its furthest corners? He writes me, about my blog posting of yesterday, entitled Thinking About Arms:

Hey Uncle!
How are you? I hope well!
I don't really have much of a theme to be writing you about, but I was just walking around my small apartment, and suddenly realized how little I swing my arms.
Now don't write me off as crazy or anything (as a matter of fact, I truly have a very good friend who has never been much of an arm swinger, actually his arms are completely devoid of any swing at all, and if you asked me "who is the craziest person you know", the name Dan would whisper in the back of my mind), because I do actually swing them, but I have to say it's less than worth making a fuss about the small amount of actual swinging going on.
I think that maybe the natural state is to walk with a healthy swing - it builds momentum and gives a pleasing aesthetic look to the walker - but maybe this swing is so natural, it is something that can only be forgone by the victim of excessive thought and introversion.
You know those strange kids in school with their heads down, with many colored sweaters draped over their most listless arms? Yeah, but they always got 102% on math tests. Excessive thought.
No, really.
If we are playing charades, and you have to act out someone with a handicap, do you expect to see an excessive amount of arm swinging? Or if you have to act out a nerd, or some mad scientist, is it not true that you would morph into a true biped, forsaking the dangling of fleshy arms?
You should really look into this.
Maybe find footage of Einstein while strolling some garden.
Even in this peaceful setting, I conjecture that the man would have quite stationary appendages.

Having successfully said nothing of importance, I'll stop before I accidentally make this a meaningful email.
Haha,
Be well,
Chris
*********
Posted by Cipriano at 11:04 pm

Chris.
You are my favorite nephew.
[Just don't mention this to the other 14 of them]!!!