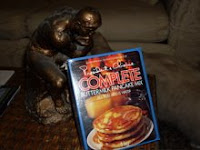 Umm… I’m not even sure I should confess the following story.
But here I go….
About a week ago I was told about some people that got very sick from eating pancakes made with expired batter!
At the time, I listened to this story with mild interest, while thinking “Hmmm. I have some old pancake mix in my cupboard, I know I do….”
Know what I mean?
I forgot about it entirely – until a few minutes ago.
I opened that cupboard to get some salt to refill my shaker!
Well there it is – that box of pancake mix!
So I took it out and looked at the expiry date.
Holy Moly!
And Uncle Badger!
I’m sort of embarrassed to tell you [keep in mind folks, I am an incorrigible bachelor]….. where was I, oh yeah, wicked embarrassed to tell you what the expiry date is on this stuff.
→ May 22, 1998.

I'm totally serious.
My mix is ten years old, with an 11th birthday fast approaching!
Isn’t that disgusting?
Should I be arrested?
And still [ever the “Waste not – Want not” type]… I am wondering, really having an inner battle here… should I throw this stuff out, or make a big heap of pancakes for myself and Jack tomorrow morning!
*******
Posted by Cipriano at 9:11 pm

It seems like, after the expiration date, the baking powder or baking soda or whatever might be dysfunctional, but I don't see why it would make you sick. Not that I have any basis by which to know. However, I do think that the least you could do is throw it a birthday party (serve pancakes) on May 22.

Yes, Rhapsody!
The Pancake Birthday Party is an EXCELLENT idea.
I can whip up some of these decade-old flapjacks and then slather them with some vintage [circa 2001] Aunt Jemima I've got festering in the fridge here.....

I'm fortunate that I move around so much, otherwise I too (I'm sure of it) would end up with a cupboard full off expired baking products... Why though do I get the feeling that if I were to visit you a year hence, this same box of pancake mix will still be in your cupboard?

Throw it out! Do you want to be sick for the holiday weekend?

I don't think I would risk it. I would if it were say a month or two past its prime but not over a decade. And don't feel bad. I think I have some dry beans in my cupboard that are about 8 years old.

No, no, it's perfectly fine. You see, when something goes bad, it eventually gets so bad that it reaches a minimum acceptability level, at which point it begins to return to perfectly safe and nutritious again. That, my friend, is why I have 10-year-old cheese in my fridge (although I should point out that it started off of lettuce).

Oh, brother!
Toss the mix,
recycle the paper,
to feel good about it.

Want a pancake recipe?
I think those mixes are just a way for the food companies to sell you flour at exorbitant prices.

I was about to give you a hard time about this when I stopped to think about some of the items in my kitchen. Specifically the spice rack that was a gift almost 12 years ago. I think I need to go do some cleaning. :)

Shark -- it is entirely possible, as you suggest.
You know me well!

I did Beth, I threw it out, I really and truly did.

Thank you for the moral support, Stefanie.

Kingmonkey, you are suggesting that I wait a bit longer until some sort of evolutionary process morphs my mix at a molecular level? Sounds intriguing... but I already threw the stuff out. It will have to do its mutating in some landfill.

Merisi, I would love a pancake recipe. You mean, from scratch? I have never in my life baked or MADE anything edible from scratch!

Oyvay! Alyce... do not even mention cleaning. I have not cleaned my fridge in like..... EVER!
I figure Hey! It's COLD in there [hence, ipso facto]... why clean it?
My oven though, one time I cleaned it. Oh, that was disgusting... I'm trying to blot out the memory...