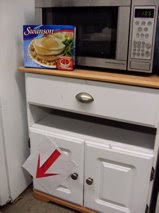 What do die-hard warehouse spiders eat?
Think about it.
Dust?
Just wee little other bugs and stuff?
No hamburger ever?
And think of all the WAITING involved.
OK, so [wicked bad karma!] you’re a frigging spider.
Doomed to shoot these webs out of your ass in the hopes that some other thing is going to fly into it. [Into the web, like!]
Yeah! Right!
Well, today I am sitting there at lunch-time, all alone, [in the non air-conditioned warehouse] reading Salman Rushdie, when something catches my eye down at the bottom of the microwave cabinet. Some sort of…… activity.
So I put the book down.
Wow.
My Spidey-Sense© is tingling.
In all seriousness now, there could not be a more non-eventful warehouse on the face of the Earth than my warehouse where I spend most of my life.
But here’s this optimistic spider.
He’s obviously read Dale Carnegie’s best-seller, How To Spin Friends and Ingest Recent Acquaintances!
Then just got on down there into this real skungy area and started spinning webs out of his butt.

And, lo and behold, something flew into it.
I know this because now I am down on all-fours, watching him methodically spin the struggling pilot into some sort of sick death-spiral, but at the same time I’m cheering for this cruel beast!
Way to go, Mr. Spider.
Kudos!
I would have NEVER had the patience….
[….. his little legs are spinning away……]
How long have you waited for this meal? Sixteen years?
Living on stored-up Kraft Dinner reserves? Is that what’s going on here?
You’re obviously not on Ab-Master©, I can see the bulge in the middle!
But wow!
To wait for food to FLY to you!
I can’t imagine.

It’s hard for me to get back into my chair, but when I do, I refocus on my Swanson’s Turkey Dinner©.
I am the superior species!
I shot absolutely nothing out of my rear end to acquire this tray of yummy food.
But to get RID of it later on today?
Well, admittedly, that’s probably going to be a bit violent, yes!
*******
Posted by Cipriano at 7:43 pm

I don't know what's more frightening about this post: the spider in your food area or the Swanson's tv dinner!

I happen to be, like many females I am told, a bit arachnophobic, which is why I look forward to my husband's return tomorrow from his week-long trip, so he can clear up the threatening situation in the room we use as an office. They are holding a CONVENTION in there! My husband doesn't know it, but he is due to be THE KEYNOTE SPEAKER, not to mention, a SPIDER SERIAL KILLER.

(You may ask, parenthetically, is that the ONLY reason I look forward to his return? No, as it happens, there are TWO DEAD PACKRATS on our property that also need "attention.")

I’m laughing...you possess the gift of turning a spider sighting into a humorous anecdote!

I hope you have evacuated that poor spider to a safe area! I always do. They love me dearly for it and hardly ever spin anything unsightly in my corners. Only in an emergency, but then I gently remind them about wrong place wrong time. They are philosophers, thank heavens, the jump on my dustpan without long discussions. They even wink when I throw them in the bushes down in the garden. Only once did a rather inexperienced one attempt to spin his spider thread right off the window sill. I started playing Strauss' Zarathustra, that taught him to run for covber in the garden!

Thank you all for reading of my real-life adventures in the Spidey-Warehouse.
One of the wildest things that ever happened in the Warehouse was when I came in one morning, flicked on the lights, and a snake slithered across the floor. I nearly hurled my previous day's Swanson's!
I hate snakes.
I threw an empty box at it, a file box, with a lid attached, got the thing inside there, ran to the back door [he/she was flapping around violently inside that box, giving me the heeby-jeebies] and I threw it out into the tall grass at the back of the place.
How it ever got IN to the warehouse, I will never know!

Ooh, snakes. Ugh. I had to do that once for a mouse; trapped it in a cracker box and flung the whole thing out the back door. I could do that; but if it was a spider (or one of those disgusting centipedes) I would be paralyzed with fear!

It's all a matter of perspective.

To us, it seems a non-eventful place, but for bugs and vermin, that makes it the best place to carry out their various brands of skulduggery. Think about it, no giant humans galumphing around, plenty of dark places for whatever illicit practices they have-- insect drug deals and what-have-you.

(On a positive note, before toady, I didn't know how to spell skulduggery or galumphing-- not words I use too often, eh?)

The spider story is good and had me laughing but the snake story! The whole library was looking at me because I was laughing so loud! Thankfully I don't have snake issues because my freshman year of college in the dorm my neighbor's garter snak got out and took up residence in my closet! Lived there for nearly a week until I stepped on in morning, barefoot, as I was getting out of bed. I snatched the little wiggler up and went nextdoor, and thrust the snake in my neighbor's face when he opened his door. it fine to be living in my closet but something else entirely to be lurking on the floor under my bare feet. at least it didn't squish!