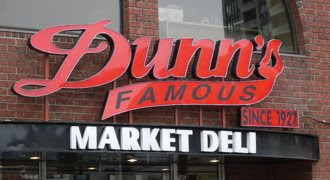 So I'm walking down the street today [Dalhousie Street, for those who need to know the whereabouts] and I see this sign, ["since 1927"] and I immediately think, "Dad was only one year old."
It's a reflex reaction.
I've been doing it for years.
My father was born in 1926.
And for some reason, that date, that YEAR has become fixed in my imagination as if it was the beginning of creation or something. No, that's not quite it -- rather, it is just that I find that I am continually using it as a sort of context....... for something.
My dad was only an infant, and "Dunn's" was already selling smoked meat sandwiches to people!
Stuff like that.
I'll be reading about the breakout of WWII and I'll think, "Wow, Dad was just 12 or 13, then."
And I think that part of the phenomenon has to do with the fact that I venerate the memory of my father, who passed away in 1999.
I mean, I recall him [vividly] describing so many things about his own early life, which is, of course, prior to my own life. His stories. They are the stuff of legend with me! 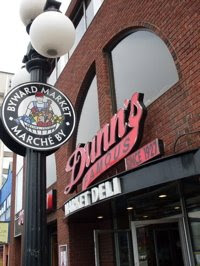 And so, whenever I see things, like the Dunn's sign, or any sort of 20th Century timeline or commemorative mark on a building, or for that matter, when I read books.... I will think stuff like, "Wow, this book was already in existence before my father was born."
In 1926, writers like Hermann Hesse, F. Scott Fitzgerald, Willa Cather, James Joyce, Sinclair Lewis, Virginia Woolf, Somerset Maugham were all in their heyday! As were T.S. Eliot, A.E. Houseman, and e.e. cummings.
And yet, I'm not kidding when I say that I think that my father did not read even ONE book in the course of his lifetime.
But I am constantly reading.
[I am convinced that I was mistaken for someone else's baby, in the maternity ward...] And I forever catch myself thinking things like, "Hmmm.... so the Narnia Chronicles were published in their entirety by the year 1954. At which time my Father was 28 years old. Did he know of them, at all?"

I know that he did NOT, in fact, know of them.
But other people did! Stuff in the literary world was totally happening.
I was addicted to reading through all the Enid Blyton books when I myself was a kid. I'd come home from the Library with armloads of them.
Well, when these books originally began coming out [in 1938] my Dad was 12 years old. Did he know of these books?
I know that he, in fact, did not.
I'll read that Rilke died in 1926, and my first thought is, "Hmmm... and my father breathed his first breath a month before this."
Stuff like that.
Jose Saramago was 4 years old when my father was born, and Yeats was 4 years dead.
It's forever happening.
I wonder if I'm just incorrigibly weird, or if any of you, out there, also have a year that is fixed in your mind as a sort of "context" year.
Aside from the obvious, your own birthdate, that is.
*********
Posted by Cipriano at 1:50 pm

Oh and so happy your blog seems to be back from wherever it went! At least, I assume it is, since you put up this nice long post!

Shark, you crack me up!
You are a but a pup! A kitten!

Rhapsody... so I am not incorrigibly weird, then?
Well, I seem to have solved the problem.... at least temporarily. It's been a week of trying to figure this glitch out!
Turns out that [and I'm not sure why all of a sudden this became an issue, with Blogger...] I have to do my initial offline document in a Plain Text format... I found a program in the MAC Applications window called Stickies.
I think Stickies is the equivalent of Notepad or whatever.

I don't think you are weird about the dates at all. It's mostly my paternal grandparents I think about. My grandpa is dead but my grandma, bless her, will be 96 in three months.

(Is it really OK for someone as young as Shark to be reading you?)

Yes, you're weird, but not particularly about the dates. Though, as far as I'm concerned. you're off by a year -- my father was born in 1925.

Speaking of Jose Saramago, did you know?: http://www.nytimes.com/2009/07/28/books/28arts-ANELEPHANTNO_BRF.html?ref=books

First off, I had no idea that Jose Saramago was so old!

The only time I've ever done that with my own birth year is in comparison with Elvis' death day. For some reason I have always been very proud that Elvis and I were both alive on the planet at the same time (at least for a few months). :)