A Word Is Born 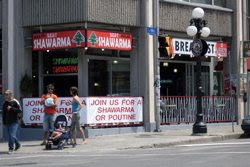 ← This was my first stop in the neighborhood trek today!
It’s the best Shawarma place in town, really it is.
At the corner of Dalhousie and York! [Come on, you all know where that is!]
It’s known as Joey’s Corner.

Went in there for a nice lunchtime chicken shawarma.
Plus I had some exciting news to deliver to the management.
But they had already heard about it.
Apparently, “shawarma” has now been added as an official word, into the Merriam-Webster Dictionary.
If you don’t believe me, check it out HERE.
Just last Thursday it was announced.
The word has apparently been in use since 1953, but not officially recognized. Or something.
And for those nutritionally impoverished souls out there who currently have not had the pleasure of experiencing shawarma, the official definition is as follows:

A sandwich esp. of sliced lamb or chicken, vegetables, and often tahini wrapped in pita bread.

Personally, even though I am as carnivorous as the next guy, I’m not familiar with the “lamb” format of the shawarma…. I was under the impression that the lamb shawarma was known as “gyros”…. sometimes prefaced with the phrase “Chicago-style” and voraciously consumed by Yours Truly with very little necessary provocation, and the restraint of a rabid mongoose! 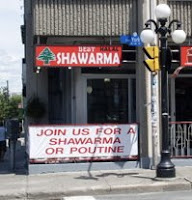 No, the shawarma I usually eat is either beef or chicken.
But hey, I'll eat a lamb too, if I have to!
Mmmmmm…. meat!
← And so now shawarma is a universally-accepted word, and shall fit very nicely between “shaving” and “shawl” in the next edition of the Merriam-Webster’s Dictionary!
I don't know about you, but I’m excited!
Now all we’ve got to do is work on getting “poutine” in there, too!
Mmmmm, it too shall look terrific one day, modestly nestled in its yummy little artery-clogging place, between “pout” and “poverty”.
***********
Posted by Cipriano at 7:32 pm

Imagine: Canadians invading the veritable Merriam-Webster! I predict poutine won't make it. (a) it sounds too much like a naughty word and (b) the cholesterol drug people will lobby against it. Or they should, at any rate!

P.S. I was looking up shawarma and just found these perfectly horrid pictures for you. (Scroll down to "Size of Your Meat Does Matter")

Hey Rhapsody!
Don't knock "poutine" until you've tried it.
You're right though, it does sound like some kind of porno-word or something.
But wow... my last visit to Toronto, stayed the better part of a week there and stayed up way too late every night, until the ONLY thing opened when I needed to eat at 3 a.m. was this one Burger King.
My friend and I walked about six miles down Yonge Street for poutine every night. [The food... not the..... never mind.]
But it is like eating death, health-wise.

This is why you will NOT see me in the 100-meter hurdles event at the 2010 Olympics in Vancouver!
Well... unless there's some kind of Shawarma-Hut© at the end of the track....... I'll knock every one of those fences over to get to THAT!
GOLD MEDAL!

I'll have to take your word for it that shawarma is good. I don't suppose they make a vegan variety? :)

You might want to consider taking a vacation to the Minnesota State Fair in St Paul sometime. You'd be in heaven--they have pork chops on a stick, walleye on a stick, chocolate covered bacon on a stick, and various other meat and stick combinations. and for dessert you can have a deep fried candybar on a stick. The ambulance will be standing by :)

Speaking of poutine sounding like a dirty word, I have a story to tell. If you are offended by dirty word, please feel free to skip over the italicized comment.

When I was in high school, there was a girl in my class named Tiffany. Once, when she overheard some fellow classmates (all boys) talking about the stuff, she got excited and described how she loved eating poutine. She loved the slippery texture and the juicy gravy, and she especially loved it when it got soggy. Her excitement made her the boys blush a little bit, and so did she when I explained to her afterward that they were talking about poontang, not poutine.

"Gyros", as I understand it, is the Greek name for a donair, with shaved beef or lamb. It would be served with tzatziki sauce, not tahini.