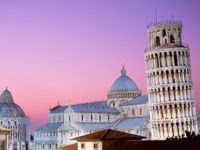 Some people have all the fun!
Usually I do not post personal sort of… blogs!
But tonight, as my friends M and R are even now this minute either boarding their plane or just freshly up in the air -- [they are off for a week in Italy and Tuscany and probably other places they were kind enough to not tell me about] -- I wish them a terrific time!
Am I envious? Of course I am! YES!
I hope you two lovebirds have the best time ever!
As for myself and Batman, we will miss you, and look forward to hearing, upon your return to reality, all of the juicy ribald tales of adventure and mayhem!
Bon voyage!
*******
Posted by Cipriano at 11:21 pm

Bon voyage to Michael and Roger! May they enjoy their Italian holiday!

Hilarious!
I thought such a thing might happen... no, no, M & R are not two boys -- not that there would be anything wrong with two lads flying off to Rome -- but see, originally I put their real names on my blog and then I revised it to initials because -- since I myself use an alias, I don't feel that I have the right to publicly post anyone else's real name[s].
Except maybe if they are a cat.
Batman is a cat. And that's his REAL name!

Thanks for the thoughts Cipriano. We had a great time and didn't think of you once - lol!