My Scar: A Reverie 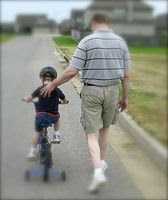 There are certain things you never forget.
Like your first beer.
Your first cigarette.
The first time you had…… never mind.
Yesterday was the complete opposite of the day before. It was damn COLD out.
The day before, I was tanning with my legs up on the balcony railing. Yesterday, though, I only ventured out there a few times. And each time I wondered….. is summer really over?
Anyhoo -- at one point I heard a racket of voices down below in the park across the street. A father [presumably] was piloting a bike-riding kid along the paved pathway, and I quickly got the impression that the youngster was about to go solo.
There is a lovely clump of trees along that path, and just as father and son entered into it I heard the elder human being yell, "You're doing it, you're doing it" and a much younger voice in reply -- "I am. I'm doing it. I'm doing it."
The trees hid my view at that point, but I knew what was happening. But for those trees, I was voyeuristically witnessing history as it applied to one small, young life.
That kid was riding a bike for the first time.
I went back into my apartment before I ever saw either of them again.
But it made me recall a similar event in my own life, albeit a bit more tragic than this kid experienced.
A hundred or so years ago, my father was likewise guiding me up and down our driveway -- training wheels off for the first time ever. Then he let me go, yelling much the same thing as this father was, yesterday.
However, instead of an affirmative answer from myself, I went careening like a headless chicken into a rolled up spool of barbwire. My dad, believing at the time that he had a normal son and all, felt there was no reason I should go wobbling directly into this area of mayhem. But I did. Who could have known that his procrastination in installing that rolled up fence would involve so much bloodshed?
I gashed my leg open so bad the blood was exiting it horizontally.
I bear the scar to this day, just below my left knee.

In the summer I wear shorts at work. On my lunch break today, I took my work boots off and put on my flip flops. As I leaned down, I saw the scar, and thought of that kid yesterday.
Even though the trees hid him -- oh, how successful he sounded. So unlike me.
*******

Riding a bike for the first time is one of those moments you never forget. I didn't run into barbed wire but I did fall off and skin my knee and elbow. I never had a glorious "I'm doing it!" moment like that kid you heard. It was more like, hey I made it down the street without falling or running into a tree/car/fence! And then turning around and praying I could manage to do it again and get back to the safety of my house.

I don't remember my very first time riding a bike, but I do recall that it took a long time for me to figure out how to use the brakes. Lots of crashes into curbs and various parked cars on the street. But I survived, and without scars. I ended up getting scars later on from other dumb stuff instead.

If I was there (or alive at the time I suppose) I would have totally tried to catch you. And me and your dad would still be proud. You can probably ride a unicycle now if you wanted to. You go, Cipriano!

I still vividly remember my first bike ride. It was a glorious moment of boy over nature (that is if gravity is considered nature?).

Funny how bike riding is one of the few universal triumphs among all people on the planet.

As for participation wounds; mine have been collected while skiing.

What a story -- it's really quite moving. My first bike ride was down our sidewalk, but I hadn't figured out brakes yet. I ran into my dad's big work truck parked in our driveway. It was just the height of my wheels so stopped the bike cold under the edge while I continued on into the door. Sigh. No permanent scars from that one, though. Not quite as elaborate as a pile of barbed wire! (though there was an incident with cactus....long story)

Patricia:
I think this was my very problem, no one had told me where the brakes were.

Blueshoes:
That would have been sweet. You catching me and/or diverting me from my suicide run!

BBB:
Skiing is something I have never done, believe it or not. I would probably pile directly into every tree all the way down.

Melwyk:
With bikes [as with cars] the brakes are more important than acceleration, even!
I want to hear the "cactus" story.