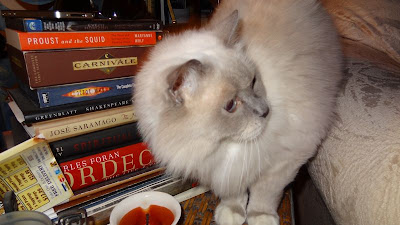 Be careful with the candle, though! My cat, Sugar, set herself on fire once. Just singed her fur, but it kept her off the shelves for a while.

My Snapshot is here.

I hear what you're saying Lisa... I have had some real problems with candles around here in the past.
Thing is, the candle in the picture is not lit, it only looks lit for some reason.
Cheers.
Loved the shot of the mural at your site.

(Diane) Bibliophile By the Sea said...

This reminds me of a white cat we had several years ago whose tail caught fire from a candle (fortunately we were right there and he wasn't hurt). Jack's a cutie.

Diane and Irene -- yes. Jack is just the most adorable cat EVER. I love him.
We're best pals!
He has let me live here with him for over ten years now!
All the best to you, both.
-- Cip

How pretty he is! Looks sorta like the cat my daughter had from a young age. It lived to be a very very old cat!
Here's My Photo

Yes, my cat set his tail on fire. But it was my husband's fault who knew he had jumped up on the counter by the gas stove. One swish of his tail and his tail was sizzling. Luckily, we got it out quickly.

Vicki -- Jack is gorgeous, I must admit. He is a purebreed Ragdoll. Very docile. Except when he is in "rascal" mode. I hope he outlives me... sort of.

Paulita -- oh that is too bad about your cat. You know, in some countries this is grounds for divorce! Letting the family cat get barbequed when your husband could have prevented it.

Your cat is so handsome (being a boy cat and all). :) I've told my husband time and again that I want a ragdoll cat someday. Two cats is our limit though, and our two that we have are rescues.

Is that Doctor Who I see in your stack? My husband and I are all atwitter about the new episode on tonight.

So observant -- both with recognizing Jack as a handsome lad, and the Dr. Who in the background.
My friend lent me the series set and I have yet to watch it at all -- thank you for the reminder.
All the best to you, Alyce.

Beautiful cat! It is always fun to find another cat and book lover.

Glad to know the candle isn't lit. Weird how the picture makes it look like it is. Jack is a very handsome cat!

PS: I love how my secret word for posting is upuri (you purr-y). Lol.

Is Jack as soft and cuddly as he looks?

Janet, Bev, and Mary -- you know, no one that has ever seen Jack has said anything negative about his appearance.
I wish I had such a good track record with the ladies!

Mary, Jack really is so soft and cuddly as he looks, seriously, he is adorable. At night he positions himself exactly where I can pet his head and rub his neck until we both fall asleep. It's the cutest thing.

Methinks Jack is not happy about the bedside book stack, adorable as he is! :-)