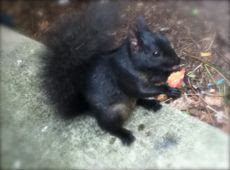 There are few things I love better than a good long weekend. And today was a beauty of a nice Sunday!
I have tomorrow off! Yayyyyy!
My day began with a severely artery clogging late breakfast at Smoke's Poutinerie followed by inordinate amounts of Starbuckian coffee and book reading. Some of you may not even know what "poutine" is, so, a word may be in order.
Poutine... umm -- it has mysterious French-Canadian origins and is a relatively new invention in the genre of Food That Will Most Likely Kill You Tomorrow.
Let's see. Basically, it's a pile of french fries drenched in gravy and cheese curds, and if you are at an up-scale poutinerie [like Smoke's] -- well, they beef it up in like a dozen or so different ways. Adding stuff to it.
A typical "grace" at Smoke's is something like, "Father forgive me, for I know not what I eat!" Then you dig in.
Te absolvo!
For the severely uninitiated, I've provided a visual --> HERE.
So after this escapade in haute cuisine, as I said, followed by gallons of coffee, I was wallowing in a sea of gastronomic guilt. Walking through the open-air Market I figured I'd offset my sins by purchasing some organically grown produce.
I bought a bag of peaches, a large onion, and some broccoli.
On my way home I stopped by my favorite little courtyard, set my bags down and resumed the reading of my book.
A few pages into chapter 57 I heard a scampering, rustling sound behind me.
A squirrel was literally hopping along the back of the bench where I sat. So I turned around, and we had a little chat...

The Friendly Squirrel persisted in nuzzling around me, and honestly, the thing was so dreadfully cute that I thought I would break off a chunk of broccoli stalk to see what he [or she?] would do with it...

It was readily apparent that this squirrel is not a vegan. I could so relate!
We had so much in common in that moment! So, realizing the onion was not an option, I reached into one of the bags and bit off a piece of organically-grown peach. The Friendly Squirrel took it straight from my fingers...

Things were getting progressively cuter by the moment. I gave The Friendly Squirrel some more... and it tied right into that, with a vigor reminiscent of how I had earlier attacked my poutine!

All in all, a wonderful day in my urban life.... filled with all the wonders of city living.
Readily available levels of cholesterol AND wildlife! What more does a guy need?
Little did I know as I set out today that it would end so serendipitously.
I made a new friend!
For further squirrel-related observations, click --> HERE.
******

So many emotions are welling up within me. First - I'm all about food/drink that will kill you. I live in the SOUTH - gravy and alcohol are staple. Secondly, but perhaps I should have mentioned this first - your cute little squirrel is merely what I call a YARD RAT! These rats invade everything idyllic about the country. They steal the vegetables from my garden and the birdseed out of my aviary friends mouths. Perhaps they are cute in Canada but round here - they be vermin. So glad you had a chance to commune with nature - no matter what form it may take. Signed: The Ugly American

Wow, Dana -- I had no idea they were such a nuisance in some parts of America.
'Round here, they'z just cute!
You do have me wondering now, though, hmm...
I wonder if they'd be good in poutine!

I wonder if I'm the only Canadian who has never had poutine? (yuck)

Your new friend is delightful!

Beth, you have never had poutine?
Oh, you should really go..... there are many Smoke's locations near you if you click on the link I provided.
Oh yeah, if you're ever craving gravy -- a poutine's just the thing!
It should be on our flag!
Just under the red leaf part, over in the corner, a little cardboard box of poutine.

I'm not quite as anti-squirrel as Dana, but in my neighborhood they certainly are a nuisance and I would never purposely feed the little buggers or next I know they'd be inviting themselves in for dinner.

I love squirrels. In my life I have seen so few of them that last summer, in Gubbio, I used to get up early to catch a glimpse of a squirrel. So rare!