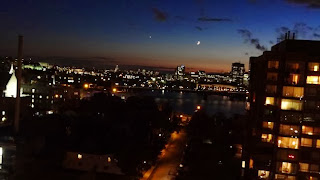 Tonight after work I went out onto the balcony with my Harp beer and WOW -- the moon was incredible. The above picture does not at all do justice to how beautiful and serene it was. To the left of it is a very bright planet, and my internet research has narrowed it down to being either Venus or Saturn.
Today was a rude awakening back-to-work day, and this calm sight in the night sky was a peaceful thing to come home to.
Over my two weeks of vacation, amidst the visiting and partying, I managed to read two books, both of them in the genre of memoir. 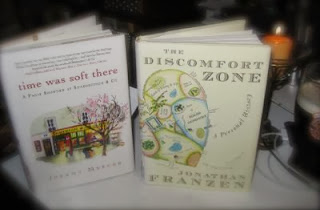 First, Time Was Soft There: A Paris Sojourn at Shakespeare & Co., by Jeremy Mercer. It's the story of an Ottawa crime reporter who feels the need to get out of Canada for a while, due to a threat encurrred over a story he wrote for his newspaper. [If you are wondering where Ottawa is, by the way, look again at the above picture. It's that stuff under the moon and mystery planet.]
He finds himself adrift in Paris, lacking in funds and occupation. No job! And he wanders into Shakespeare and Co., which is a famous bookstore [a la Hemingway's A Moveable Feast?] the owner of which, tends to sympathize with the plight of bohemian vagrants. Mercer finds out that he can LIVE at the bookstore if he wants to.
And he does. He ends up becoming a resident there for quite a while. Literally sacking out on various mattresses that are liberally distributed on the many different levels of the bookstore. It is a crazy adventure, well told. I found myself thoroughly immersed in the story and, at times, wishing it was mine.
Makes me want to visit this legendary bookstore one day. I doubt I would ever be able to live there [my real life has too many demands] but I would love to walk around in the afterglow of the many thousands of others that have done that very thing. A really great book.
Then I read Jonathan Franzen's, The Discomfort Zone: A Personal History.
He is one of my favourite authors, and that really helps -- if you are going to read this book. I mean, it is interesting and everything, but there are those times when you wonder WHY you are reading it. There is nothing incredibly grandiose about his adventures, or even his life -- but since my own life is very similar, I did find it interesting. These six journal-essays are fun, for sure. Insightful. And I think every reader would find parallels in their own life…. especially if you are currently approaching the age of 50 or so [as I am]. All the high-school hijinx -- the angst over nuclear family and personal marital issues --  and then the last chapter, where Franzen talks about the development of his obsessive preoccupation with birdwatching -- it's a lot of fun. I've loved his novels, for sure -- I  only wish, in retrospect, that I had read The Discomfort Zone prior to reading them, because I would have appreciated the author's themes [which tend to the side of family, and general relationship dysfunction] a lot clearer. I do recommend it, and reading The Discomfort Zone will reveal the author as a man of great intellect -- in the most modest, self-deprecating, and non self-aggrandizing way imaginable. A man fully aware of his own discomforts, unafraid to share them.
*****
Posted by Cipriano at 9:41 pm

Interesting about The Discomfort Zone. I liked The Corrections a lot, and have read some of Franzen's essays, which are good. I might pick up more of his nonfiction at some point. But ... he's kind of a jerk sometimes about things he personally doesn't like, such as Twitter. I don't like him in real life that much. But that doesn't mean his writing doesn't have value, of course.