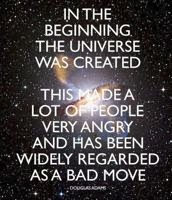 I am an extremely boring person to know, unless you want to talk a lot. [Ask anyone I know! They'll tell you!]
What I mean by that is -- umm, I don't DO much.
My favorite pastime is reading, drinking coffee [or beer] and thinking. But also talking with people. I do that a lot.
And I find that I tend to try to steer people toward talking about what I would call… Ultimate Reality.
Ideas about existence itself, Awareness, life after death, religion, God, evolution, etc., -- I love to just try and get a handle on where people are "at" with their own thinking about such topics.
I myself have been all over the map on these issues, throughout my life. And as I rapidly approach a half century of a lot of pensive coffee-drinking [and beer] -- I have sort of settled myself into a number of viewpoints about these issues that seem to satisfy me. But as I discuss them with people I always include the proviso that this is what I "currently" believe -- because it does change. Old ideas get displaced by what I consider better ideas.
[This right now is the place where I will not at all be offended if you click this blog shut, because I am about to yap for quite a while about what I call "anthropocentrism". If you want to keep reading, it will require patience.]

As I have talked with other people, maybe hundreds of people over the years, I've noticed a distinct correlation between ideas of human evolution and ideas of sentient life on other planets.
That is my "premise" statement for what follows.

My observation is that almost invariably, [admittedly, proponents of Intelligent Design throw a few human-made wrenches into it] if a person is OK with the idea of human evolution [a la Darwinism] -- they will almost always also be sympathetic to the idea of the possibility of sentient life on other planets -- I mean, outside of our own solar system.
Many people believe in outright Creationism [a la, The Bible, and other such texts].
Vis a vis there is a God who purposed to create human beings -- and did so. What follows in a discussion with people who feel strongly about this, is that He [God] did not ALSO create other beings somewhere in outer space, on other planets. He only created us. I myself, when a far less critical thinker than I am today, also believed in this idea, and strongly so. [I no longer do].
I find that such a propensity can only lead, whether a person is aware of it leading to this or not, that the reason that everything exists is because of our own existence.  I could cite many Bible references that tend to allude to, and in effect, encourage, such an interpretation of human existence.
In light of what we have scientifically discovered about the Universe, however, I have come to see this as a very narrow "anthropocentric" view to adhere to.
Which is to say I can no longer hold to it.
To compare the existence of human life on planet Earth with what we now know about how long [time-wise] existence itself has... existed -- it seems to me an ignorant, possibly arrogant and definitely self-centered way of looking at whatever Ultimate Reality is.
But back to my premise [above] -- I want to try and narrow this current field of discussion to just a few questions that you can maybe ask yourself over a coffee or a beer, to assess what you yourself believe.

Are you a Creationist?
If so -- my premise would statistically predict that you do not believe there is sentient life elsewhere in the Universe. In other words, we, as human beings, apart from God, are the only beings anywhere, aware of our own existence in the Universe.
[Do you see how anthropocentric that sounds?]
Are you an Atheist?
If so -- my premise would statistically predict that you are able to swallow the idea that we are possibly not the only beings anywhere capable of, you know…. creating things like salami, Lamborghinis, and….. Facebook.
Are you an "Intelligent Designer"?
If so -- you may believe that God sort of "used" evolution to do his "creating" of sentient life?
Whichever of these categories you [again] "currently" find yourself falling into -- to my mind, there are only so many options out there, to truly believe in, when you consider the correlation of the ideas of human evolution, and other sentient life somewhere in outer space.
They are these:

I am being completely sincere when I say that if you can think of yet another [sixth] valid option, other than these five above, I would love to hear of it.

I'm sorry -- but I am very aware that I am a "thinker".
A very boring person, like I said at the start. I think a lot. A real lot.
But I cannot fathom the idea that if every other person on planet Earth died from something right now, and I was the only one left alive... typing away and opening the last of a soon-to-be-extinct luxury of beer [an entire possibility, right? Unlikely as it is?] -- that if that were to take place --  I would be the only sentient being thinking, about something -- in the entire Universe.
To me that is far too anthropocentric of a view to be anywhere near being tenable.
And by the way, if it were to happen, wouldn't I, in that moment, become the Being we have always mistakenly called "God"?
*****
Posted by Cipriano at 12:32 am

Wow, #5 had never occurred to me -- great premise for a fantasy novel.

How about #6, There is more than one god, and they collaborated to create us. Design by committee -- no wonder we turned out like this.

I used to firmly believe in #1, and then started to think about #3', but am now a firm believer in #4. How the worldview can shift is somewhat astonishing. But it has for me.

Isabella -- Your #6 idea is, I suppose, another option. But you have to include then the suffix part of it. The "correlation". Did these numerous gods also create life elsewhere in the Universe? Or just here on Earth?

Jeane -- It's interesting, my own progression through these ideas [or "regression", as some might think it] is very much the same as yours.

I sit firmly at #4 and would be thrilled to find out what a sentient being somewhere else might look like because it would be so totally and wildly different than us.

It seems to me #3 can be possible without being contradictory at all. It just depends on one's concept of God, doesn't it? I mean, if you believe in God as divine spark of life and that God created the whole universe it wouldn't be impossible to believe that same divine spark of life touched some other planet somewhere. The Bible then would only be true of our world as our own myth and explanation, what God wants of us, not those on Alpha Centauri.

What I wonder though, is about all those people who believe in aliens and who even have been abducted. What might their beliefs be and if anything other 4 or possibly 3, how they reconcile that?

First of all, I know a lot of boring people and you are certainly not one of them. The most interesting people I know are thinkers.. I happen to know you by the way.

Whether or not there are beings anywhere else in the universe is another one of those questions that doesn't mean a whole lot to me. I find the whole idea very interesting.. and sure, I've thought about it many times, but it has become (to me) irrelevant in the big picture. Looking up into the sky at night, it's hard to imagine that we are the only beings created by God.. a universe so huge and magnificent..how is that even possible? In the same sense, the universe goes on forever..that's a fact.. how is that even possible??

I love thinking.. I love answers.. but I've come to realize that there are countless questions to which I will never find the answers to.. and I'm okay with that. I'm okay with that because I have faith in God that created me.. and you.. and everyone else. I understand that my belief in God and creation can come across as narrow and stuffy with all of the elaborate views out there but it is the only belief that makes sense to me..time and time again.

I believe in God, but not in the same way that kids "believe" in Santa. My belief in God comes from faith alone. It's much deeper than a childhood fantasy or a nice idea. Faith is a difficult thing to grasp since proof is what we are all looking for. If God is real why doesn't he prove himself!!? I've asked myself and others this question many times. In my search for the meaning of faith, I have come to understand very clearly that God wants a relationship with us that is based on faith, in the same way that I want a relationship with my husband that is based on faith. If my husband began to question everything that I did, where I was, who I was with etc. our relationship would no longer be based on trust. If I had to prove myself over and over again we would have no relationship.. not a healthy one at least.

I think I just wrote a book so I will stop here and leave you with this. Don't ever stop thinking .. but consider faith.

Stefanie --
Interesting points you raise. Especially about alien abduction stories. In my understanding, one cannot be both a Bible [type] believer and also subscribe to alien abduction theories. Because, the Bible is a very closed system when it comes down to it. Intelligent alien life would preclude that there is a lot of stuff God forgot to tell us about in the Bible, you know?
Abduction theorists [which I am not part of that group] would almost for sure have to of the #4 variety of person.

Anonymous "baba" --
Thank you for such a nice thoughtful and wise response to this sort of needless conundrum I have posted here. I do tend to think a lot about things that ultimately have no definite answers, that's for sure.
But I really like what you had to say here, and I think the marriage analogy is really appropriate. I'm really going to think on that a bit. Really neat.
Thanks for reading my blog, baba.