A Revival of Saramago 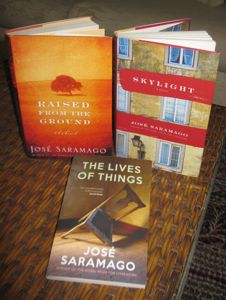 Imagine my joy to be walking through a bookstore in Oshawa one day while on vacation and discovering a stack of Jose Saramago books on a table. I was convinced I had read everything that the man ever wrote. But it seems that after his death on June 18th, 2010 [a day I will never forget] -- his publishers had been holding back on a few things, and he is now being posthumously published again!
The book I found that day was called Raised From The Ground, first published in Portuguese in 1980, now freshly translated into English. I had no idea the thing existed. I promptly bought two copies.
I read it, and it was fantastic.
A bit later on, after doing a bit of research I found one called The Lives of Things, a collection of six short stories. Again I got two copies, sending one to my best friend. But there was yet one more discovery to be made, a novel called Skylight, which was Saramago's first novel, written when he was a mere 31 years old. It was rejected at the time. Being ignored by that publisher plunged the writer into a painful, indelible silence that lasted decades. Even after winning the Nobel Prize for Literature in 1998, Saramago continued to keep this book Skylight a secret, refusing to have it published during his earthly existence.
But we have it now.
I encourage you to read it. In fact, if you have never read Jose Saramago, Skylight may be a good place to start, because it is written in a straightforward, grammatically correct way. Later on he adopted a style so unique that some readers may find those books hard to follow -- although I myself found them irresistible. I love what his wife, Pilar del Rio, said in the Introduction to Skylight:
Skylight is the gift that Saramago readers deserved to receive. It is not the closing of a door; on the contrary, it flings the door wide open so that we can go back inside and read or reread his other novels in the light of what he was writing as a young man. Skylight is the gateway into Saramago's work and will be a real discovery for its readers. As if a perfect circle had closed. As if death did not exist.
As if death did not exist.
Jose Saramago died 1,850 days ago. 5 years and 24 days ago. 264 weeks and 2 days ago. 44,400 hours ago. 2,664,000 minutes ago. 159,840,000 seconds.
I'm so glad he left us this last gift to open, on our way to re-reading everything else. 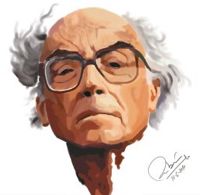 How wonderful to find not one but three new books by your favorite author from whom you never thought there would be anything new.

The day I’ll never forget is the 17th of June: I got married. Let me not count the years, the months, the days, the minutes…. It’s depressing!! I said ‘YES’. Why?
3 weeks ago, a 75 year-old woman start having a row with her 79 year old husband. She told him to ‘shut up’; he denied and challenged her to do something about it. She grabbed a small axe and planted it on his skull. Then she called their ‘kids’, stating “I had enough of the bastard. He is dead”. The ‘kids’ were not surprised said to the police; they were expecting it sooner or later. It just happened quite later. This 75 year old woman had enough for long enough time(46 years of marriage!!)
I am not the biggest fan of short stories. They linger shortly into readers’ minds and memory. People need time to get attached with the setting, the characters, the situations; you don’t get that time in a short story. It’s like a flash of lighting. But writers take prices for short stories, and they could be a good compromise for the summer holidays. So read carefully “the Dead Hand grabs You” and “I Dream of Biting Cip with my Red, Red Teeth”. They are vividly imagined meditations on memory, justice and revenge. Have I told you that I have a red car? Just like Isserley.
Saramago’s widow, Pilar del Rio, is probably right when she believes that ‘Skylight is the gateway into Saramago's work and will be a real discovery for its readers’. But she talks nonsense when she suggests that ‘As if a perfect circle had closed.As if death did not exist’. When someone dies a circle is closed and when a circle is closed, then you have created a zero( 0). The point for me is to create the figure of 8(my lucky number), the symbol of infinity which reflects the balance of opposites, male and female, day and night, dark and light and the union of 2 equals. Saramago was already a Nobel laureate and an accomplished writer and his widow had every right to decide on what to publish and what not.
I spotted in New Yorker,Margaret Atwood's "The Stone Mattress".I think it's hilarious;brings memories of the first time I was thrown out of Criminal Law.The whole amphitheatre was laughing,the lecturer was not!!
By the way your friend’s short-story is for A-LEVEL exams. In the beginning he notices a symbol on the rock. Does he use it later on? NO! Why is this man digging? I would have played with the meaning of 2 words: Pluto (Wealth) and Pluton. Last month I was reading and writing summaries for my kid’s Literature exams. Two of the writers I had to read were Louis Sepulveda and John Fowles.John is so exceptional!!
Please delete all my posts,all the stupid irrelevant posts. GO ON.