The Extra Ones: A Saturday Poem 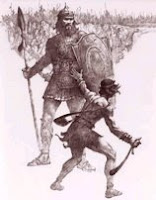 We are told that he chose five smooth stones.
Young, and ruddy faced, in 1 Samuel 17:40.
I would have imagined jagged ones to cause
greater cranial damage, but who am I?
This sling was not even the type you draw back on.
It was the kind you whirl about your head.
I know, because there was an artist’s rendition
in the book my mother read, as my eyes fell shut.

So an army cowers, as the boy runs forward,
taunting this oaf! This day the Lord will hand you
over to me. He kicks the dirt and spits, And I’ll
strike you down and cut off your head. Shaking,
he shouts at a helmet that weighs more than him,
The birds shall eat you, placing a stone in the pouch.
Philistine laughter shakes the very rainclouds
loose over the heads of Israel, as the air sings.

And what I love most is not the part where he cuts
off the head. Nor even the part where Saul asks,
Whose son are you, young man?
I love the fact that David took four extra stones.
Ones he did not know he did not need.
The scene that is not illustrated in any bedtime book,
and the sound, ping-ping-ping-ping, denting helmets
as the Philistines run for the hills.

NOTE: I posted this poem previously, about a year ago... but have just made some significant changes to it, primarily with the ending. In → the original, I have David dropping these unused stones on Goliath's head. In the updated version, he uses these "extras" to pick off a few more Philistines as they run away. Your comments on this revision are welcome.
*************
Posted by Cipriano at 2:14 pm

Both are excellent but I do prefer the revised version. I like the visual image of David pelting the extra stones at those fleeing figures rather than at Goliath’s helmet – who had already been downed/conquered.

I agree, this version has a strong ending. I love the feeling of being told the 'hidden story' of what happened after Goliath was downed. Plus it is a great visual image, as Beth says.

Thank you both for your comments.
HOWEVER, I received some commentary from a reader and it has completely made me re-think my changes, and quite frankly, I am in a funk! The problem is, all of the points raised are relevant... to the point that I am wondering if I should go back to the original version.
My reader suggests the following:

Pinging Goliath's helmet suggests a more pensive thing on David's part to me. It's a "ping" - not a big crashing sound. So I don't imagine there being a great deal of force behind it. And that is the very point. David - who did not know that he did not need the extra stones - must have been as astonished as everyone else at the scene.

Opening it up as you have to him "pinging" the Philistines' helmets places a concrete threat. It is not that they have SEEN what David can DO with GOD'S help so much as place a very real-time threat to them in the form of stones upon them.
To move from pinging Goliath's helmet to pinging the Philistines' - for me - does seem to de-emphasize the underlying faith, not in David...but in the Philistines. For here is this miracle in plain sight for scoffers to behold: it is a boy killing a giant with the help of his God. The Philistines would be, if they are observing the Goliath-pings, going Wowser!
When David unleashes the pings on the Philistines, it focuses more on the violence. As though it is now in his blood or something. Uncontrolled.
The goal of killing one's enemy.
Pinging Goliath's helmet makes a statement - but it is more controlled.

For me, to hit Goliath's helmet - when he does not NEED to (it would perhaps be a warning to the Philistines to clean up their act or they are next) - would emphasize David's wonder-reflection-musing at a God who would allow him, help him, to conquer an enemy.
When he turns and attacks the Philistines, it places a little more emphasis on David himself as an agent of death...I imagine the Philistines running because of David's power more than in abject fear at what God can do through a boy. They are running from God - if David pings Goliath's helmet. And they are running from a boy if he pings theirs.All of this, the above.... umm... it makes me realize the inestimable value of an editor, when it comes to writing.