Is My Cat Retarded? 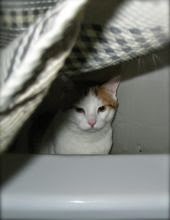 I know that a lot of you out there are cat owners, and so I just want to begin by saying that the question in my blog-title is actually a sincere one. Maybe you can help me.
I think my cat Kennedy is maybe a bit mentally retarded.
He seems to want to live his life in my bathtub, mainly in the space between the inner and outer shower curtains, the former of which he keeps tearing to shreds, and I have to keep buying new ones all the time. He seems insanely intrigued with the bathtub. He's just always in there, mostly in this inner sanctum place, but other times just sprawled out right in the tub. He's obsessed with it. The weird thing is, my last cat [Jack] was similarly insane -- just not quite to this same degree, and at least he did not shred the inner liner. But Kennedy is hardcore in love with my bathtub.
So I honestly am wondering if this is just some kind of common thing with cats? Does your cat do this? Should I seek counseling for this guy? Or just assume that this behavior "goes with the territory" and maybe subscribe to some sort of service that regularly sends me shower curtains in the mail?
*****
Posted by Cipriano at 9:51 pm

I'm telling you, leave a slick of water in the bottom of your tub and he'll get wet once.
Then again, he may resort to shredding something else you care for more than a shower curtain...
It's a bit of a gamble.
C.

I think it must be a common cat thing. A prior cat I had liked sitting in the tub and would even sleep in it sometimes especially when it was hot. Waldo loves the tub and will jump in as soon as I turn off the water when showering. He also likes to hang out between the curtains and he and Dickens like to attack each other from either side of them. But weirdest of all is that sometimes Waldo will just go sit in the tub and yowl. We think he has a great sense of acoustics because he knows all the places in the house where his yowls will amplify the most, the shower being one of the best. So I think Kennedy is fine. If he isn't there is a rampant mental health problem in the feline community!

My cat loves to lie wherever the temperature is right. In the winter, he'll sit next to me and, the moment I get up, he'll move to the warm spot I left. In the summer, he'll sit on a marble table on the porch, presumably because it's cooler. Or, he'll sit in any of the sinks. So, I have to ask: do you keep your place warm? He might prefer the coolness of the tub.

Various cats I've known have liked occasionally to curl up in sinks, but the sinks seem appropriately cat-sized. My current cat ventures into the tub only when spider hunting. I think the tub-sitting is weird (but that's what my cat says to me when I take a bubble bath).

You could try leaving an extra water bowl under the tub tap. Our two cats love their water from the bath tub so we fill a cat sized water bowl and set it down under the tap. Both go in there to drink water even though we have another water bowl by their food dishes in the kitchen. When you need to use the tub take out the water bowl and replace when your done.