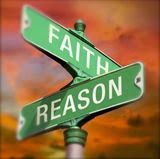 I have a current theory that is making its way across the circuits of my brain, repeatedly, and it goes something like this:
The more intelligent a person is, or becomes, the less will be the tendency to believe in God.
It is my own learning and mind-expansion that has caused me to become less and less convinced of the existence of God -- at least as portrayed in the Bible. Having spent many years as a fundamentalist Christian, I think I have a fair understanding of what faith is. But I have concluded that it cannot be synonymous with reason.
And I like reading. I have always loved reading. So it interests me to discover, in my half century of life -- that most writers, the authors I have grown to love and admire - they almost unanimously are not people of faith. The discovery feels sort of like joining a new congregation. The Bible speaks of the value of not being ashamed of one's faith. In fact, it advocates laying your head down on the chopping block for it. Nowadays, I am more likely to proclaim that I am not ashamed of REASON, and leave the business of decapitations to, you know -- over-zealous religious groups! If you don't know what I mean, watch the news.
Anyhoo -- the videoclip below contains little snippets from authors you and I know and love.
None of them believe in God.
For what it's worth, the remarks I found that most resonated with me were those of Isaac Asimov, Jose Saramago, Ian McEwan, and Diana Athill. And then of course, Christopher Hitchens jumps on in there at the end to seal the lid on the thing. The entire clip is 25 minutes long, and worth watching.
Here is a list of the authors, in order of appearance:

I would be interested, in the comments section, to hear your opinion on my premise statement, above:
The more intelligent a person is, or becomes, the less will be the tendency to believe in God.
Do you agree that this is true? If not, please elucidate a bit on how intelligence and reason leads us to a belief in God.
And then watch the news again.
*****
Posted by Cipriano at 8:25 pm

I disagree with your thesis Cip. I used to think it was the case but I have met too many highly intelligent people who strongly believe in God. I am an atheist who works at a Catholic law school and our professors, not all Catholic, are extremely smart (one of them worked for the U.S. State Department) and very firm in their faith and practice law from that faith often for the good (social justice) but sometimes from the overzealous (rabidly prolife). So the thesis doesn't hold in my experience.

There might, I think, be something to your theory but it would probably be more a "likelihood" than an absolute. As Stephanie said, I know of some highly intelligent and accomplished people who are believers. But I do sense a higher percentage of believers among those with the least formal education, so there just might be something to your theory that needs to be further refined.