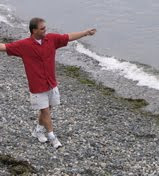 There was a time in my life when I would not have known a religious quotation from a raccoon.
Then I grew very fond of religious quotations, and thought them profound.
The past decade has found me shaking my head from side to side far more often than nodding up and down. Religious ideas have become, by definition, banal. Vapid. Bromidic.
Why is this?
I feel that the answer involves the fact that I am less willing to stand on that once comfortable platform of Prior Assent.
That place where we convince ourselves it is OK to believe what we are about to hear, because of what we have previously been told.
Today, nowadays, what interests me most is what I haven't heard from anyone.
-- Cipriano --

Is there anything that hasn't already been said by someone, somewhere? I think probably not. Just rehashing old ideas and beliefs to make it seem new or profound. And unfortunately, religion tops that list of abusers, to what we have today. And I won't go on about religion causing wars, and terany, and death, cause really man in its basic level is a violent animal and religion is often just an outlet of that aggression. Meanwhile religion is a result of our insecurities when we are not mangeling each other!